Princeville Airport (HPV), located 2 miles east of Princeville, opened in 1977 as a quasi-public general aviation airport.  In November 1983 Hurricane Iwa hit Kauai and caused millions of dollars in damage. Lihue Airport did not have the capacity to handle all the emergency flights and smaller planes landed at Princeville.

In 1994 the state entered into a lease agreement with the owner of Princeville Airport to add it as part of the State Airport System, but this was not to be and in 1999 the State dropped these plans. The last flights were by Makani Kai Air in 2019 and the airport shut down due to the pandemic.

The airport underwent repairs and repaving early 2022 in anticipation of reopening later in 2022.

Makai Kai Air was an FAA Part 135 scheduled air carrier based in Honolulu, Hawaii. It was a subsidiary of Schuman Aviation Company as well as Mokulele Airlines, 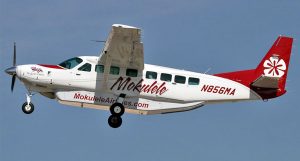 On June 3, 2020, Makani Kai announced it would be merging with Mokulele Airlines, another commuter airline operating in Hawaii. No more details available at this stage.