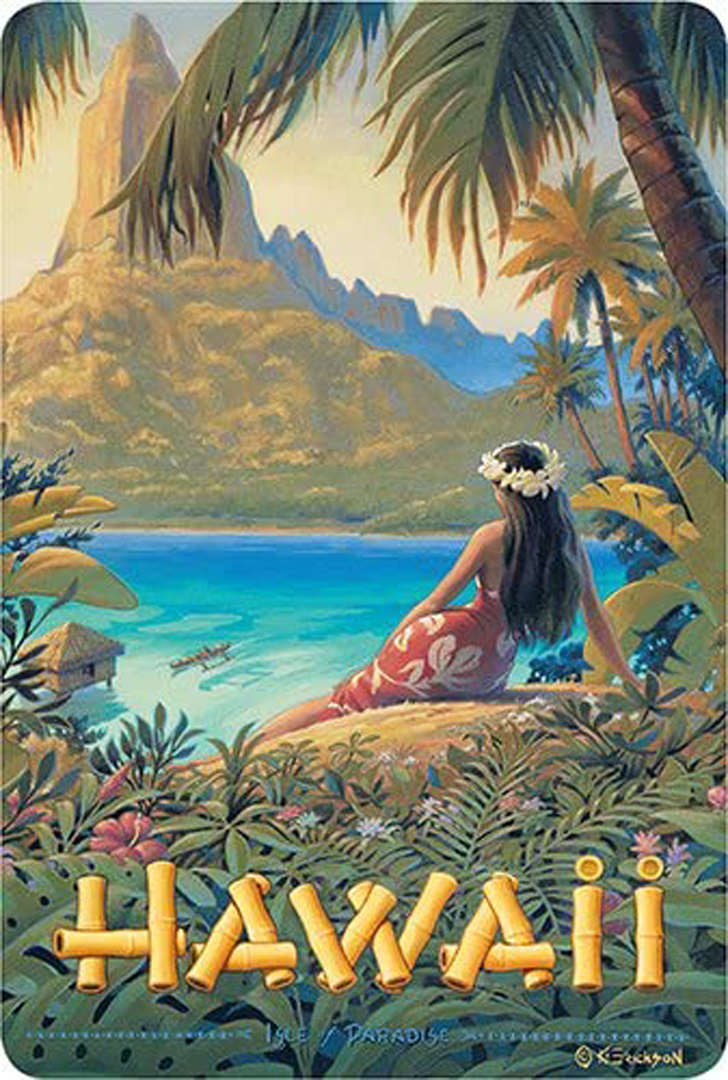 The Hawaiian Islands were formed by volcanic activity initiated at an undersea magma source called the Hawaiʻi hotspot. The process continues to build islands today; the tectonic plate beneath much of the Pacific Ocean continually moves northwest and the hot spot remains stationary, slowly creating new volcanoes. Because of the hotspot’s location, all currently active land volcanoes are located on the southern half of Hawaiʻi Island.

1000 and 1200 – Different peoples from Southeast Asia gradually migrated south and east from the Solomons to Fiji, to the Polynesian Triangle from New Zealand east to Easter Island, and north to Hawaii.

Based on archaeological evidence found by the Bishop Museum it is believed that Polynesian settlers from the Marquesas Islands settle on Hawaii around 750 A.D. By about the year 1000, other arrivals from Tahiti were populating the islands.

11th Century – Further groups arrive from Raiatea and Bora Bora. The islands continue a slow, steady growth in population and the size of the chiefdoms.

16th Century – It is very possible that Spanish explorers arrive in the Hawaiian Islands, but this has been dismissed due to insufficient credibility.

Hawaii History in the 1700s

During the 1780s and 1790s, chiefs often fought for power. Hawaii history indicates that after a series of battles that ended in 1795, all inhabited islands were subjugated under a single ruler, who became known as King Kamehameha the Great (Kauai was the only island never to be conquered). He established the House of Kamehameha, and is considered the founder and first ruler of the Kingdom of Hawaii. Three dynasties ruled the kingdom for nearly a century, starting with Kamehameha I in 1795 and ending with Queen Liliuokalani in 1893.

Hawaii History in the 1800s

1810 – Kauai ceded to Kamehameha I who united the Hawaiian Islands and Hawaii becomes a unified, internationally recognized kingdom.

1816 – English Captain George Beckley designed the present-day flag and raised it over the fort he commanded in Honolulu. He kept the British flag in the upper left-hand corner and added eight red, white, and blue stripes to represent the eight Hawaiian Islands.

1819 – Kamehameha I dies and his son Kamehameha II assumes the throne and rules with the regent Queen Ka’ahumanu. The first missionaries arrive in Hawaii and convert many Hawaiians to Christianity.

By 1820s – Disease, famine, and wars between the chiefs killed more than half of the Native Hawaiian population.

Before the arrival of Captain James Cook, the Hawaiian language had no written form. That form was developed between 1820 and 1826, mainly by American Protestant missionaries who assigned to the Hawaiian phonemes’ letters from the Latin alphabet.

1824 – Kauikeaouli, son of Kamehameha I, becomes Kamehameha III on the death of Liholiho.

1839 – The 1839 Hawaiian Bill of Rights, also known as the Constitution of Hawaii, was an attempt by Kamehameha III and his chiefs to guarantee that the Hawaiian people would not lose their tenured land. The Great Mahele Kamehameha III sought to keep the land in Hawaiian hands by adopting a western allodial system with a new system that would divide the land into thirds – one-third to the Hawaiian crown lands, one-third to the chiefs, and one-third to the people. In the end, the people received less than 1 percent as the law required land claims to be filed within two years under the Kuleana Act. Many Hawaiians made no claim, largely because ownership of land was not a common concept.

1843 – On February 10, 1843, Captain Lord George Paulet, of HMS Carysfort landed in Honolulu in response to the complaints by the British Consul in Honolulu Richard Charlton, who had an underlying land dispute with the Hawaiian government, and claimed British subjects were being denied their legal rights. Paulet, without the authorization of his superiors, unilaterally occupied the kingdom in the name of Queen Victoria on February 25 despite the protests of Hawaiian King Kamehameha III and his ministers. The Hawaiian king ceded his sovereignty under protest to the British government. Paulet placed himself and a committee in charge, restricted trade in the ports, destroyed all Hawaiian flags that could be found, and raised the British Union Jack in their place. After a five-month occupation, Rear-Admiral Richard Darton Thomas, the Commander-in-Chief of the Pacific Station, sailed into Honolulu on his flagship HMS Dublin on July 26, 1843, and requested an interview with the king. A new treaty was negotiated with the British giving British subjects on the islands “perfect equality with the most favored foreigners”. On July 31, 1843, Thomas raised the Hawaiian flag in place of the Union Jack at the plains east of Honolulu, formally ending the occupation. (This piece of Hawaii history is courtesy of Wikipedia.)

1845 – Honolulu becomes the capital of the Hawaiian Kingdom.

During the 1850s, measles killed a fifth of Hawaii’s people.

1850 – Foreigners are allowed to legally own land for the first time.

1872 – The death of the bachelor King Kamehameha V—who did not name an heir—resulted in the election of William Charles Lunalilo over Kalākaua and his appointment as the first elected king. Lunalilo was a descendant of a half broker of Kamehameha I.

1873 – Lunalilo dies without naming an heir. This results in an election the following year between Prince David Kalākaua and Emma, Queen Consort of Kamehameha IV. After riots broke out, the US and Britain landed troops on the islands to restore order. King Kalākaua was chosen as monarch by the Legislative Assembly by a vote of 39 to 6 on February 12, 1874. Kalākaua, sometimes called The Merrie Monarch, was to be the last king and penultimate monarch of the Kingdom of Hawaiʻi.

1887 – The 1887 Constitution of the Kingdom of Hawaii is signed stripping King Kalakaua, and therefore the Hawaiian monarchy, of much of its authority, empowering the legislature and cabinet of the government. This became known as the Bayonet Constitution due to the force used to gain the King’s cooperation. King Kalākaua, reduced to a figurehead, reigned until his death in 1891.

1891 – King Kalākaua dies and is succeeded by his sister Queen Lili’uokalani who took the throne and was the last monarch of Hawaiʻi.

1892 – The first pineapple cannery is opened.

1893 – Queen Liliʻuokalani announced plans for a new constitution to proclaim herself an absolute monarch. A group of mostly Euro-American business leaders and residents formed the Committee of Safety to stage a coup d’état against the kingdom and seek annexation by the United States. Queen Liliuokalani is forced to relinquish all future claims to the throne and two years later the Kingdom of Hawaii is dissolved. The following year a new constitution was ratified and Sanford B. Dole, who had been president of the Provisional Government, is endorsed as president.

1898 – The Spanish-American War broke out and President McKinley, who had taken office a year earlier, was convinced that annexation was the best option — lest the growing Japanese population in Hawaii would lead to Japan dominating the Pacific. Hawaii was officially annexed by the United States through the Newlands Resolution and signed into law. Sanford Dole became the newly appointed governor of the Territory of Hawaii.

Hawaii History in the 1900s

1900 – The Organic Act establishes the Territory of Hawaii.

1920 – The unmixed indigenous Hawaiian population reaches an all-time low of 24,000. For the first time air flights to Hawaii are introduced.

1941 – On December 7, 1941, the Japanese launch a surprise attack on Pearl Harbor on Oahu during World War II.

1945 – On September 2, 1945, Japan signs its unconditional surrender on the USS Battleship Missouri

In the 1950s, the plantation owners’ power was broken by the descendants of immigrant laborers, who were born in Hawaiʻi and were U.S. citizens. Eager to gain full representation in Congress and the Electoral College, residents actively campaigned for statehood.

1959 – On June 27, 1959, a referendum asked residents of Hawaiʻi to vote on the statehood bill; 94.3 percent voted in favor of statehood and 5.7 percent opposed it and Hawaii becomes the fiftieth State of the United States of America.

During the 60s and 70s, after attaining statehood, Hawaiʻi quickly modernized through construction and a rapidly growing tourism economy.

1993 – Congress issues an apology to the people of Hawaii for the U.S. government’s role in the overthrow and acknowledged that “the native Hawaiian people never directly relinquished to the United States their claims to their inherent sovereignty.”

1994 – Under a congressional appropriations act and presidential order, the island of Kaho’olawe is returned to the State of Hawaii.

Hawaii History in the 2000s

2016 – Alexander & Baldwin announces that it will phase out sugar cane farming at its Hawaiian Commercial & Sugar Co. Maui subsidiary. Historically dominated by a plantation economy, Hawaii remains a major agricultural exporter due to its fertile soil and uniquely tropical climate in the U.S. Its economy has gradually diversified since the mid-20th century, with tourism and military defense becoming the two largest sectors. The state attracts tourists, surfers, and scientists from around the world with its diverse natural scenery, warm tropical climate, abundance of public beaches, oceanic surroundings, active volcanoes, and clear skies on the Big Island.

For a list of Hawaiian holidays visit Hawaii Holidays on I Heart Princeville.
For a history of Kauai and specifically Princeville and the North Shore, click here.
For more information on Hawaii History visit Wikipedia.

Others explored the activities of the island